Young Nova 75 said:
Yeah, vintage car enthusiasts don’t have that much fun over here, compared to what I see and hear from you guys in the US.
They pay pretty close attention here, unless you have a good connection to your local Tuv-Guy, but he also won’t put his job in danger for letting you drive a sh*tbox or something that will fall back on him, if you ever get in trouble with the police. So only because you have a good connection, doesnt mean you can do whatever you want.
If you go to a "normal“ Tuv station, they probably would freak out for you having a fully digital tach installed in your 70‘s car…
Also engine swaps are difficult, only swaps in between years of the model built or same Cui (Liters), I believe, get the classic car plate.
So LS swapping things, costs alot of money not only for parts, but you also have to run an emission test at Tuv so they can check the pollution, which is different to the org. Engine of course.
This test costs you a few thousand Euros,I heard of someone who needed to pay 10k for it.
I also know someone in the community which built a restomod Nomad with a Ls 3 swap, I believe he works for the US military in Wiesbaden and got the car registered through them.
His Youtube Channel is called: Roger‘s Hot Rod Garage
Disclaimer: His garage and everything is very US in my view, please don’t think every garage or house looks like this in Germany. 🙃

You definitely want to get the classic car plate here for cars which don’t have a catalytic converter and big engine sizes. Because the tax you pay is calculated through the Liters (Cui) of the engine and if you don‘t have a "cat“ they multiply engine size with a higher number, which leads to you paying more taxes.
These taxes can get pretty expensive, talking about lower hundreds per month, so up to lower thousands per year, gas not included!
A friend of the family owns a first gen Dodge Viper and pays 100 Euro‘ish per month in taxes. He decided to register it only for 3 months a year, which is possible through a "season plate".But he still pays 300 Euros only to legally drive his car on the street for 3 months. -.-
For older Cars with big engines you pay even more…

Sadly I don’t know which 5-Speed is installed.
All I know is that the conversion was already made in Canada and I got a piece of paper from a mechanic that tells the owner not to use a short shifter, guess what they installed…😂
Are there any tell-tales on the bell, when it’s installed, to identify the model?

Man, I really can’t cut it any shorter…

Thanks for your appreciation

I hope this nonsense is not what's coming here. It sounds more like a carbon tax/penalty than a legitimate process. I mean, come on, how many 50 year old American gas guzzlers are there in Germany and yet they are essentially penalizing the owners. Ridiculous. Thank you for your post. I never knew it was this bad in Germany.

I just looked back here and I was shocked, that I started this thread 9 Months ago ... Warning: Picture heavy post!

I was working on my project more or less frequently, University started and I got my first "side-job".

Nonetheless I wanted to share my progress and some details from the inside, which you guys haven´t seen yet.

Here are some old photos of the car, from the day where my Dad bought it. I found them a few months ago.
View attachment 445608


A small picture from the inside (before tearing everything apart to start the war against the good ol rust) , tiltable steering column is a big plus for me. Custom Tach, that looks quite ugly (not my taste at least xd). Later on I have to think about what I want to do with the middle console, probably deleting it, the "extra gauges" too. Because I was thinking about installing a Dakota Digital Tach, if someone has experience with them please share! I hope the conversion gets allowed by German Tuv, because there is a regulation that states: "Only cars with upgrades that were possible during the era of the car (which means +- 10 years of production) are allowed to get a historical vehicle license plate."
So I need to find out when Dakota Digital started producing their stuff, I believe it was something around 1986, again if someone has knowledge about that please share!
View attachment 445601


So that was some work and took some time to figure out which tools work best , but I got it done. Sadly a "few" holes showed up, the big marked part on the upper left is already out and I got myself new fuel tank braces, to repair the stuff thats going on underneath.
View attachment 445606

Sooo this is the current state, made some room to work at the floor panels. Me and my Dad worked on it a few evenings to remove the undercoating as good as we can (still not 100% done), so my Dad can start welding the trunk panel.
View attachment 445607


As you can see there is still a lot of work to do. Just a short list for you: -welding floorpanels, -"de-rust" floor panels+ everything that has to do with it and cover it with rust converter and undercoating,
after that: - change the front frame, this installed one is bent, because the previous owner crashed it (restore the spare one + mount the engine), then work on the inside etc. Small detailed steps I know, but you can probably see, it doesn´t stop there. I can just thank my Dad that he is supporting me and made me able to work on such a nice car. I know this project isn´t nearly finished, but I also don´t pressure myself to get it done quick.

I really like to think about what I still want to do with this car. As I mentioned in my original post I want to build it more pro-street like and that idea solidfied in my mind. Thinking about a roll-cage and stripping the interior, not sure if I want to do only 1 or 2 seats. My Dad supports this too, which is nice.

So that was my at least a foot long message, to update you guys. Really looking forward to your thoughts and comments. Again if somebody has experience with Dakota Digital, let me know!

Very nice. Somewhat rare rear defrost option. Tilt steering column, nice. Consider using a Chevy/Nova Rally steering wheel, they look nice (and original to SS). Rare console gauges...nice!
For manual transmission you might need this console (unless the one you have clears all the gear shifting). 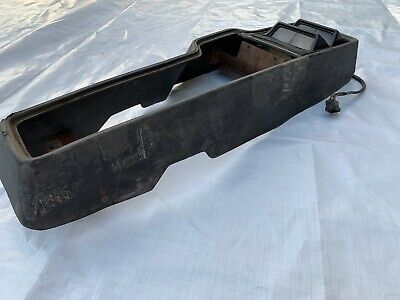 Very rare 1975-1979 Nova four speed console. Per eBay policy this item has not been tested so it is listed as parts only not working. See pictures for condition and wear. Please note - applications are based upon various sources. - Although I try to make sure research is correct - it can be...
www.ebay.com

Nice Nova...amazing that you have access to parts in Germany. I love the roller hoop-type set up you have...please post more pictures of how it is attached to the side of the car (if you can). I am more familiar with the rotisserie set up, but what I see you using looks more practical for working on the undercarriage...Nice!
1 - 2 of 2 Posts
About this Discussion
34 Replies
14 Participants
Last post:
Twinshadows 2 mo ago
Chevy Nova Forum
A forum community dedicated to all Chevy Nova, Chevy II, Acadian owners and enthusiasts. Come join the discussion about performance, modifications, classifieds, troubleshooting, maintenance, and more!
Full Forum Listing
Explore Our Forums
Drivetrain & Performance Body and Interior Steering, Suspension, and Chassis 1st & 2nd Generation Chevy II/Nova's 3rd Generation Chevy II/Nova's

AT4X versions of the GMC Sierra and Canyon.
120+ members
Join now to ask and comment!
Continue with Facebook
Continue with Google
or sign up with email
Top