Joined Jun 29, 2020
·
958 Posts
What's going on at the driver side of your track bar? I can't figure out how it's mounted from the picture. It's nice and flat though, doesn't get much better than that.

xxdabroxx said:
What's going on at the driver side of your track bar? I can't figure out how it's mounted from the picture. It's nice and flat though, doesn't get much better than that.
Click to expand...

It's an offset clamp assembly from Speedway. It clamps onto the square downtube and provides an offset 3/4" bolt for the panhard joint. When I was making the panhard bar, it made sense to offset it longer rather than shorter. I am slightly concerned with the axle bracket length. The axle bracket started life as a Speedway bolt on job. I had to section and extend it by 4" to get the mounting point out to something like 8". 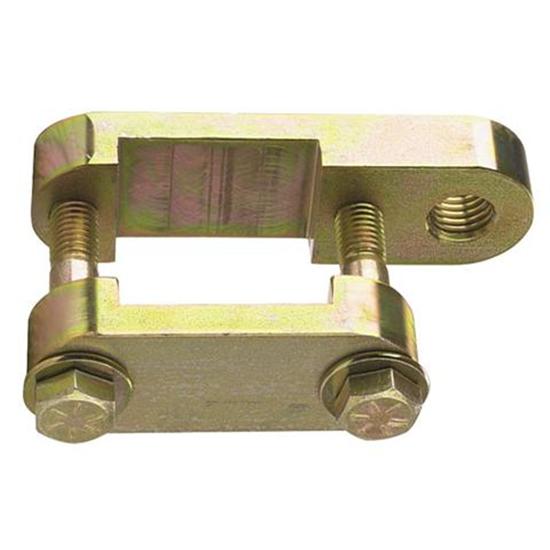 These panhard bar mounts make it easy to adjust or change your set-up. They each have two 1/2" mounting bolts and accept a 3/4" panhard bolt. Single pick-up points.

Joined Feb 3, 2013
·
3,591 Posts
I know you used raptor liner on the underneath, but it looks speckled or is it just the lighting?

lwlevens said:
I know you used raptor liner on the underneath, but it looks speckled or is it just the lighting?
Click to expand...

Must be the lighting…and dust/dirt probably. Still have not cleaned it up since fab work under there.

1974 Nova SS
Joined Feb 27, 2011
·
1,481 Posts
Got back to work on the tunnel sheet metal. Had to cut more tunnel out to get the driveshaft in, then more to allow clearance for suspension compression. I am happy the driveshaft fits correctly. Also happy the 4-link crossmember cut out is correct. Full droop is good with driveshaft clearance. I discovered another “to do”. Have to figure out a bump stop solution for the rear axle. That will be somewhat tricky given all the apparatus already on the axle and a general lack of room. This task sure snowballed. I originally had a single piece of sheet metal to cover the tunnel but had to section it to get the height and fit correct. Still have to figure out the driveshaft safety loop too. Lots of work to do.

1974 Nova SS
Joined Feb 27, 2011
·
1,481 Posts
Completed the driveshaft safety loop. I cut apart a UMI loop for a Chevelle (I think) and fabricated my solution. Back onto the tunnel sheet metal next.

1974 Nova SS
Joined Feb 27, 2011
·
1,481 Posts
Shifter hump next. This is an interesting challenge. I would like to make the entire hump removable. As of this moment, the plan is to make a lower flange (flat) out of 14ga. (Template shown). Then an upper flange out of 19ga. For the fore and aft ends, I’ll have to make sheet metal flanges and stretch them to the curve of the tunnel. For the sides, one piece filler sheet meta with a flange broke on the bottom. Then filler pieces front and back.

One idea I’ve been considering…making the top plate smaller (than the bottom opening) and angling the sides. This would really only affect the front because the back is going to need to be pretty much vertical due to the positioning of the upper shifter boot. I admit, I do think it will be much easier to make a symmetrical box without angles, from a fabrication perspective.

one think that is bothering me, if I do make a “box”, that will leave a hard corner right next to leg/hip. I don’t know if it’s really an issue because the car will have 4 point harnesses and hopefully a console over the shifter hump. But I still don’t like it. Rounded corners would be better but I haven’t figured out a reasonable way to make that happen yet. There is solid chance the console won’t be there for a while though. I don’t know, have to sleep on it I guess.

one thing is for sure, this tunnel/shifter hump fab job is a lot of work!

1974 Nova SS
Joined Feb 27, 2011
·
1,481 Posts
The Hooker shifter hump arrived yesterday. Unfortunately, it’s too big and the curve profile is way off on the front. Not only that, I’d have to make the shifter hole in the tunnel much larger to match the lower opening. Back to plan A.

1974 Nova SS
Joined Feb 27, 2011
·
1,481 Posts
Box-shifter-hump. Ugly as hell IMO. Is what it is at this point. Transmission is really high in the tunnel. Have to mount the flange and weld the box to it next. I’ll use rivnuts to bolt it down to the tunnel. Not sure how I’ll gasket it.

1974 Nova SS
Joined Feb 27, 2011
·
1,481 Posts
Pulled the rear and installed one of the bump stops. Had to bend the backing plate a bit to get it to match the frame contour. Used nutserts to attach it.