I only ordered them about a week or so ago so this is totally unexpected! Hoping it's not another blue frog deal... I'll be on the hunt with one of my larger calibers if so...

Getting close. Pulling things together this weekend to begin the tear-down!!

My springs showed up this afternoon which was a total shock to me... and I found some really nice Maddox body hammers and dolly set at Goodwill for $6.49 too so YAY! I have an old set I've used for decades but these are fresh and crisp and haven't been used at all. Still have the plastic coating on the faces of everything too!!

So shocked they showed in less than two weeks! Good for powder, good for wet, good for 1320!!

Joined 11 mo ago
·
2,118 Posts
Update 10-16-2021: Decided to perform some destructive testing on the rear wheelwell sheetmetal and quarters and found there is very little rust however, some meth-head was quite overzealous with the bondo to blend and fill the entire side of the car where the trim holes were as well as some apparent damage to the smoothness of the fender flares at the wheel opening to hide the hammer marks for wheel/tire fitment... So... Looking like I lucked out and only have to shrink and cut a small bit to get the wideness I'm looking for without much if any rust. They took it to the metal and bonded it to the clean metal so... My dolly talent and stretching begins!! Enjoy the meth-fueled body sculpting pics!!

F'ing fire sale!! It's all going away so no worries. No rust is good for me!!

Joined 11 mo ago
·
2,118 Posts
The rigged shall soon become unrigged at long last!

My kid was super happy to actually start working and was recording everything so he can see his progress along the way and at the end. We got the tail and side marker lights out, rear trim panel, rear wiring harness, rear seat (upper and lower, trunk latch receiver out and oh, did I mention bondo?


Pile of worthless bondo from the passenger's side (courtesy of my son's handiwork with a mallet and screwdriver):


Driver's rear after a good wire wheeling (still plenty of leaded joints in this beast):


Driver's side rear Q after some destructive testing...:

We have our work cut out for us but it's not terrible so far. Mostly dents and fraulein von hammersmarks...

At least! Friggin' idiotic but I must say, whoever did the bondo work must have been meth-fueled... It was nearly perfect and you could barely tell it was there save for the thud, not clank and the strange position some of the lines were at in the body... and the cracks in it... LOL! UGH! I loathe bondo! It will soon all be metal with possibly a light skim of cat hair glass or some metal filler to cure any minor irregularities in the welds when I'm done with the bodywork. We'll see I guess.. Looking forward to more posts of progress FINALLY. More parts showing up soon too so we should be in good shape to keep the progress momentum going.

Joined 11 mo ago
·
2,118 Posts
My GF also found these on FB Marketplace for me. $30 new in the package, never opened! And I met another hod rodder too in the process!

1972 6 Cylinder Dragster :)
Joined 8 mo ago
·
521 Posts
@Stroker Ace Ventura hey brother I'm not sure how great you are with sheetmetal and dealing with defects and repairs. I encourage you to take a look at ProShaper.com and get yourself a shrinking disk, if you're not familiar it's worth learning a little about. I'm by no means an expert but I spent a fair amount of time with Wray and learned a couple of things.

Basically if we took a flat piece of sheet metal and smacked it a few times with a ball peen hammer, we would have stretched the metal. Most body men would do their best to smack the dents back out which is basically just stretching back in the other direction or at least shaping the metal back into that direction, it will never return to flat / straight though without shrinking. That's where a shrinking disk comes in although old school guys might use a torch, it tends to be a lot more aggressive. 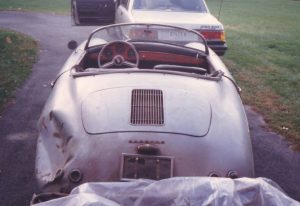 This article will show you how to remove a 30 year old dent, with the use on my shrinking disc! No high cost body work needed!
www.proshaper.com

but if he replaces the bondo with new metal...I mean bondo is "plastic" and I'd think it would be lighter than steel. lol. Ok, I won't make too many jokes because there's a good chance mine looks like that under the orange peel paint. I see evidence of lots of bondo but I'm not yet at the point of dealing with it.

Joined 11 mo ago
·
2,118 Posts
Ken @unstable , Thanks for the links!! Yeah, been practicing and watching some shrinking from old-school body workers and some custom guys doing their magic and hope to refine my technique to a point I can get most of the mess out. The dents I have are far too nasty to worry about and most of that metal is getting stretched beyond a normal sane person's imagination so yeah, my widebody is coming together at long last!! Just need to make my templates correctly so I can flop/mirror everything side to side. Should prove interesting but I'll check out the links you provided. Maybe there's more I can learn (LOL, like I'm a total dumba$$ so... there's that...) about shrinking (no, not George Costanza-style....).

unstable said:
but if he replaces the bondo with new metal...I mean bondo is "plastic" and I'd think it would be lighter than steel. lol. Ok, I won't make too many jokes because there's a good chance mine looks like that under the orange peel paint. I see evidence of lots of bondo but I'm not yet at the point of dealing with it.
Click to expand...

Yeah, well... the bondo was on top of the steel that got bashed out with a hammer to make room for the larger tires and wheels he had in there so... steel + bondo= UGH! There was so much bondo in there.... We're saving it all to weigh when we're done if we can. It's all coming out and it will be nothing but metal when I'm done. I may do some lead work or brazing instead so I don't have to deal with the leading but we'll see how things go. I may just TIG the heck out of it, grind t and call it a day... No telling just yet. Been working my plans out for the last 1.5 years in my head and have it all out on paper how I want it to be so, soon it will be revealed what a total schlock I am