Joined Aug 23, 2018
·
19 Posts
Just finished repainting the '63 SS convertible - last done in 1990. While at it, replaced a lot of the shiny stuff that had faded over the decades. Drove Joe Grom nuts (OK, more nuts than he already is) chasing fasteners and those aggravating little things that we never think about until the car is in 300 pieces spread all over the garage. I finally found the correct color to 2-tone the red bucket seats and panels as per original build. New top will have to wait until spring when I can get it to Marietta Auto Trim (the best), but I did spring for the $400 top weatherstrip. I sure hope my wife doesn't find this thread...she thinks I bought a new garage door.
New carb rebuild from J&J ($200 vs $35 in 1990) is beautiful and works like it is suppose to. First time out of the garage and the fuel pump quit from 2010. Just quit, with less than 200 miles on it. Opened it up to find a check valve popped loose. Just laying there on top of the diaphram. Weird. No OEM pumps in stock within driving distance. NAPA found me a Carter B0122P for $36 UPS from Kingsport for next day delivery. Since these things are a bit hard to find locally, I ordered a spare - from Knoxville, and a 'spare' starter from.... New York. Got the 1st one installed and started right up, then gas - lots of gas. Fuel had blown all over the place, coming from the bolt in top of pump which was tight - NOT from any of the fittings. Never saw that before. Can you mount one of these things wrong? Knoxville pump not here yet, and wanting that spare, so NAPA found another one in New York where the starter was living. This car was a trailer queen for nearly 30 years. Now, I'm gonna' drive it starting with Super Chevy Bristol this weekend if I can find enough 'spare parts' to cover whatever.
If I get there....look me up. The Old-GM-Guy in the white '63 convertible. Or just follow the smell of fresh fuel......

I have had a starter break before. Pulled up in front of the house
(parked out in the street) , then, went out to move the car into the driveway. When I hit the key to start , it made a HUGH Noise ...... but, started right up. So, I think "what was that" ....... when I looked back into the street ----- there was a chunk of metal.
That 'noise' was the "nose of the starter" laying in the street. It broke off the whole part from the mounting bolts to the flywheel, still holding on by one mount bolt. By luck --- I had worked on the trans (p/g) and had left the lower flex-plate cover off .... causing the broken part to fall on the ground. Not sure what noise it would have been , if that cover had been in place and that chunk of alumn. kept spinning inside there. I was lucky.

Joined Aug 23, 2018
·
19 Posts
thanks, Jim. I want to drive this car more, but the days of finding spare parts at the local auto parts house are all but over. Where I live, most of the roads are narrow, hilly and with no shoulder and no place to pull over if a sudden stall. I find myself feeling bumps and hearing sounds coming from the car that probably have been happening for decades, and I'm sure most of it doesn't really exist. Long Gone are the days of driving this Nova 300 miles to Nashville then back over a weekend with $9 in my pocket for gas, diaper bag in the back, bald tires all around and no Interstate highways.... and all the parts stores closed on Sunday. Not a care in the world -- then. Getting old.

Joined Feb 3, 2014
·
4,123 Posts
Don't write off a longer trip just yet. You're working out all the bugs in the car by driving it on shorter trips and fixing the faults. I've did that on my convertible, and got the following 'opportunities':

-3 different cracks at alignment to finally get it to stop wandering
-popping off and losing an original oil cap that was too loose on the 210 freeway, and finding another one that fit better
-running out of gas when it showed 1/4 tank (faulty gauge)
-losing a shift rod from its hole, leaving me stuck in second gear on Colorado Blvd.
-fixing a plugged and sticking lifter that wasn't plugged back in 2000, but got stuck 14 years later when the engine was restarted.
-replacing a brake drum warped by a curb strike

But you have to remember these were dependable daily drivers when new. I've had several Nova daily drivers that were super dependable. Just gotta shake out the bugs, use the best possible parts sources, and be prepared.

heduncan said:
thanks, Jim. I want to drive this car more, but the days of finding spare parts at the local auto parts house are all but over. Where I live, most of the roads are narrow, hilly and with no shoulder and no place to pull over if a sudden stall. I find myself feeling bumps and hearing sounds coming from the car that probably have been happening for decades, and I'm sure most of it doesn't really exist. Long Gone are the days of driving this Nova 300 miles to Nashville then back over a weekend with $9 in my pocket for gas, diaper bag in the back, bald tires all around and no Interstate highways.... and all the parts stores closed on Sunday. Not a care in the world -- then. Getting old.
Click to expand... 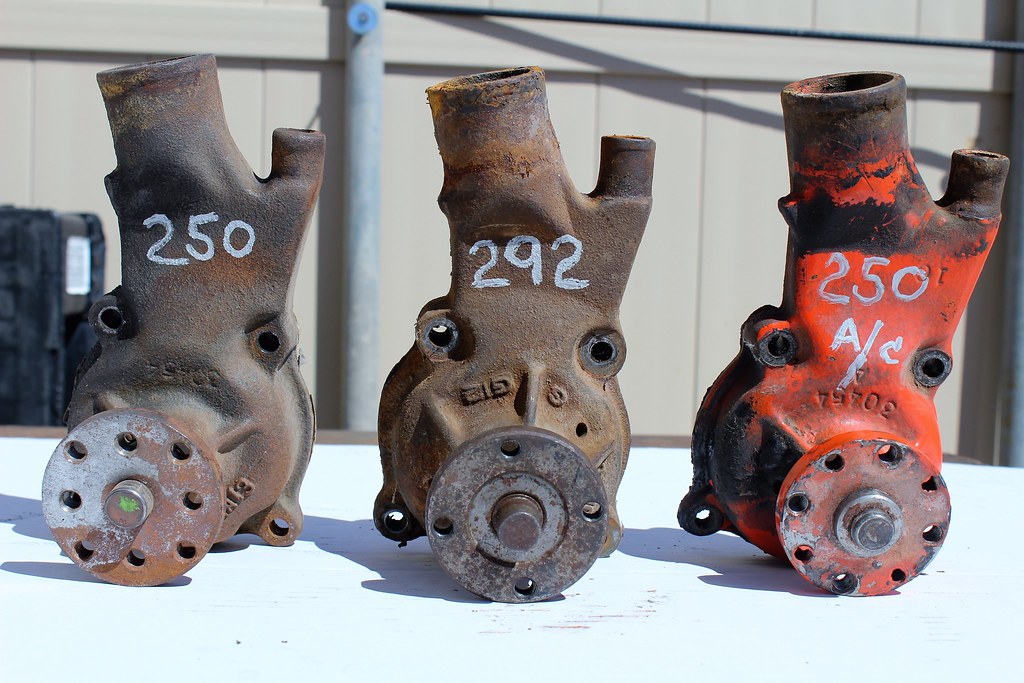 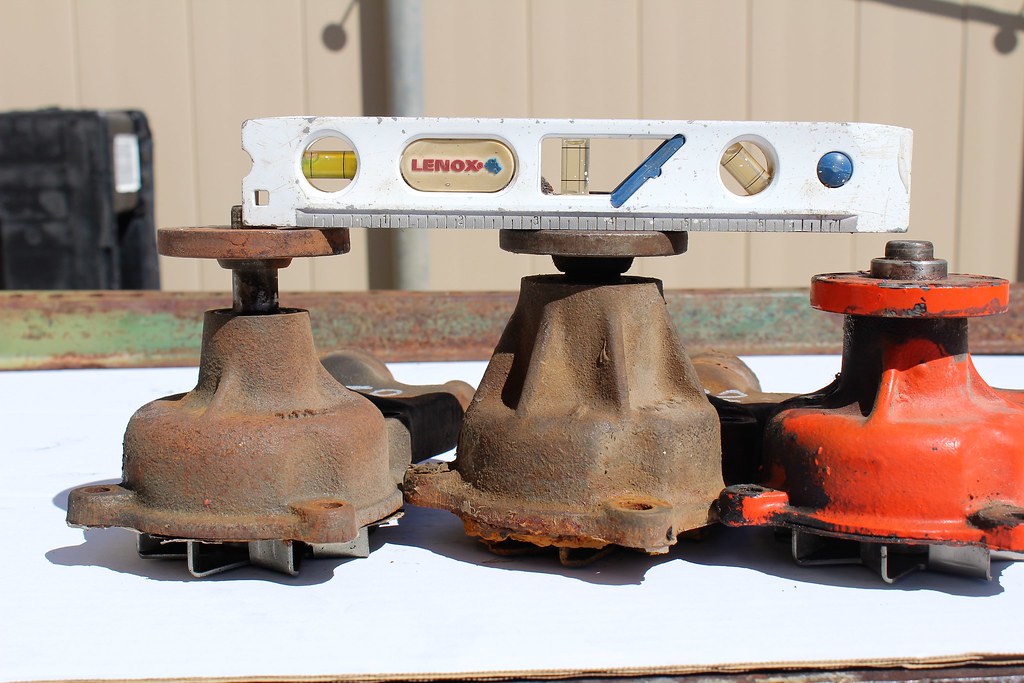 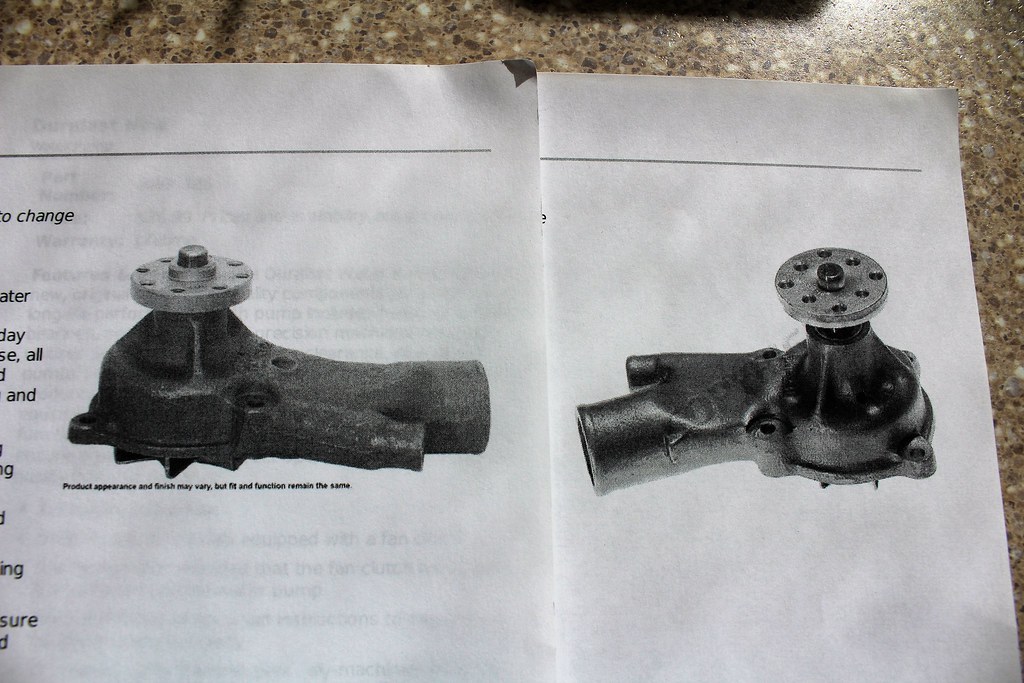 AND .... there's the Problem : picture #2 ... look at the 'shorter housing' with a long shaft, standard style pump
No A/C water pumps available because ; they use the 'a/c short water pump housing to rebuild the standard six water pumps.
Then, when needing an a/c water pump ................ there are no
"short style housings left --- bingo !

Put on the spare fuel pump from NAPA, the one they gave me to replace the one erupting fuel from the top bolt. B-0122-P. Scratched myself near to death getting the dang thing on under the A/C compressor. Hooked it up. Cranked the car but no to the point of starting. Just for grins I took a look at the pump. FUEL ALL OVER THE DARN THING - DRIPPING ON THE FLOOR. Same as the last one. Puddled in the indent on the top. Took photos and went to a mechanic who owns and works on these cars. He assured me it was another ANOTHER bad pump. He says there is suppose to be an O-ring or sealer gasket under that bolt to prevent leakage under pressure. Since NAPA will void warranty if I take the top off to look, I didn't check that. Got that other one (from New York) which I bought as a spare coming Monday. Anyone wanna go for THREE DUDS? Enough with Carter. Ordering a Delphi. Please... if I'm doing something wrong or you've had the same experience, let me know. [email protected]

NAPA pumps that fit our Novas are supplied to NAPA by Carter Fuel systems, so I called Carter. Spoke with a nice guy who eventually admitted, under intense questioning which I learned by watching the Kavanaugh hearing, that they had a 'batch' of bad ones that somehow got mixed with good ones (NAPA B0012P) and there is no way to tell the difference. Advised I return it to NAPA and 'hope' I get a good one this time. Problem started with pumps for Corvairs then spread to GM 6-cyl and small block pumps. Carter finally tells me I might want to get a Delphi to be sure. OK, AMF0073 $38.99 from Summitt. Now...what do I do with the Carter spare when it gets here?

Have them pull this pump and compare it to your stock pump.
just thinking out-loud --- I'm sure there may be a difference , but I'd sure look (plus, they (local store here in Prescott)., had that pump in stock , don't remember the price -- around $20

After the 2nd failure it had to be something common. The top of this pump, as mounted on the 194, is a round, concave metal piece separated from the body by a heavy gasket. A 7/16 hex head in the center of the top piece, when torqued down against the center stud the hex head screws into, compresses the gasket and thus seals the gasket tightly under the hex head. I put a socket on that hex head and got almost three full turns (with minor effort) before it bottomed out. I would guess that the circular top piece has a 'spring effect' when installed during build. The outside edge of the piece is compressed to a set torque, but the center (with the spring effect) doesn't seat before that torque point is reached and the bold never bottoms out, leaving an unsealed gasket below the bolt which allows fuel to seep through the threads of the bolt, flowing out the top of the pump. If the top steel piece used is at all off in shape (too tall in the center), the 'torque set-point' meets the limit of resistance trying to compress the steel down to the stud, and doesn't get there. In any case.... a couple of turns of a wrench stopped the fuel flow. I drove it a few miles and it stayed dry. Do I trust it? Would you?

Maybe around the block , to the Local Store , just keep checking for being dry for a few days / or week. You'd be surprised that I 'pop my hood' and give my motor a once - over almost each time I go anywhere. I like my motor ...... and, it helps me to stay on top of things.
My (newer style fuel pump) does not have that top 'bolt'. mine is a 'crimped style' fuel pump. But, it's been running since 2012 .
Run it until you get your Delphi & compare. I'd say you found your problem ..... write down the miles & date installed , and give it a try.

Joined Aug 23, 2018
·
19 Posts
closing this thread. Can't win.........
I ordered another 'new' one from Delphi. Going with GM. Going with America. Got it in a pretty box with Delphi all over it. And it was EXACTLY the same as the junk ones known to come from Carter. Even the little tag under the screw was the same. Made in Mexico. Guys.... there just ain't no faith left, just different boxes.

Joined Jan 4, 2015
·
81 Posts
The valve in my fuel pump (2 year old NAPA) fell out and I've just reluctantly replaced it with another. It leaked fuel out of the top screw at first just like yours but I was able to tighten it enough to where it doesn't leak, though it didn't give me much confidence. Guess I'll take a chance, that's what hot rodding is all about, right?